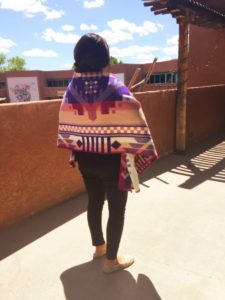 The legacy of violence against our Native women and children within New Mexico dates back to the Spanish and Euro-American invasion of our Native lands and our sacred bodies. From the Navajo Long Walk to the slave trades in Albuquerque’s Old Town to the current struggles of cases being lost within our judicial system- this is a legacy of violence… this incursion of violence onto our most sacred… must be spoken about.

Although our tribal governments and organizations advocate for our tribes and Pueblos to have the power to prosecute non-natives, the process of expanding jurisdiction is and will take years and years to get to the point where our systems, both tribally and federally, can begin to truly protect our women and children.

Anthonette Christine Cayedito. Remember her name… and take some time to honor that name with not only your heart… but with your voice.

New Mexico ranks 3rd of being the “highest violent” state in the United States with 6561 violent crimes per 100,000. When we look at border-town violence and police brutality against Native people- Native people are more likely to be killed by police officers than any other minority group in the Nation. We are #1 in child poverty, and we rank 49th in education. Over 40% of our Native youth live in poverty here. 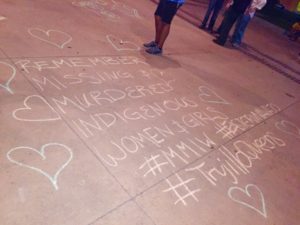 Anthonette Christine Cayedito is missing. Like most families in our tribal communities, and most Navajo girls, Anthonette helped with chores around the house and cared for two of her little sisters. In April of 1986, Anthonette was only nine years old when she was abducted outside of her home in Gallup, New Mexico. Her abduction provided no evidence, and her family wondered for years. A year later, a mysterious call was dispatched to the police asking for help- and a voice of an angry man yelled in the background-  the call ended with a scream. Anthonette’s abduction left her family left in the dark of unanswered questions, hopeless in the judicial system, and depression. These kind of abductions tear families apart- guilt, blame, heartache and possibly, struggles with coping of loss.  Nearly 30 years later, there has been no movement in this unsolved case and Anthonette is still missing. Click here to read more about her case

Dear Anthonette, our little one, my hopes are that your name will never be forgotten alongside the names of all of our little ones, missing and murdered. Your names will bring light to our hearts to fight harder for you. We will not forget your names.

The night of November 20th, 2014 was a night of terror for me- a night I can never forget. It was finals week at the University of New Mexico and I woke up to more then 80 missed calls from my mother, little sister and great grandmother. So many thoughts ran through my mind that night wondering if they had broken down from their daily commute from the reservation to Albuquerque or if my grandmother needed help.

When I called my mom back, she said are you ready to hear this? You have to come home now… she informed me that my grandmother Zonnie Begay was stabbed 28 times and my auntie Zachanda Trujillo was stabbed 13 times to death by one of our in-law in Ojo Encino, New Mexico. Ojo Encino is located on the checkerboard region of Eastern Navajo Territory and is the in the Northwestern part of New Mexico.

It took nearly two and a half hours for any police enforcement to come to the scene. After Spencer Monossey murdered my relatives, he rushed home and later committed suicide.  We never understood why this happened. The women in my family have nothing but love and compassion for their community and relatives. My grandmother and auntie were the epitome of love and care. 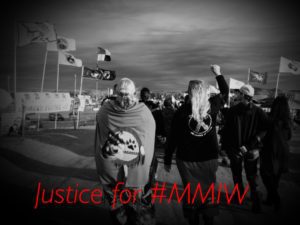 A full investigation has yet to happen. After the initial investigation, the FBI called my family in and gave them the clothes of my grandmother and auntie with no explanation or ways to move forward. The FBI agent told my family that there is nothing that can be done because the perpetrator killed himself. It’s a closed case- no justice can be rendered.

Let me say that again… no justice can be rendered.

The systematic failure in response to violence throughout these situations where our missing and murdered Native women and girls are involved is that there is often a lack of infrastructure for response, a lack of first responders and a lack of solid investigation to pursue these cases. There is also a lack of support. Something we at CSVANW are trying to change.

It’s very complicated to recognize who has jurisdiction over a piece of land on checkerboards regions of the Navajo Nation or on our Pueblos and other tribal nations. At a recent training I attended, prosecutors spoke to how they often have to use GPS at times to pinpoint the exact location of a crime- to determine who rightfully has jurisdiction. This can take months- if not years.

In a recent and highly publicized case, involving the kidnapping, murder and assault of our little one, Ashlynne Mike… I know one thing: our children CANNOT wait for us to get our shit (excuse my language) together- they NEED us to protect them NOW!

And so, this is my call to action. As a proud member of the #CSVANWTeam and a Native youth, I ask you to support our sister Coalition, the Montana Native Women’s Coalition (Click Here for their website) and the Montana Congressional Delegates in asking our United States Congress to create a National Day of Awareness for Missing and Murdered Native Women and Girls.

A National Day of Awareness will help our tribal communities and the broader nation to remember our Native grandmothers, mothers, aunties, sisters and our little ones who did not expect their hopes and dreams to be taken so soon. It will also help us to bring awareness and remember the names of those who are still missing.

Help us tell the nation the names of all of our missing and murdered Native women and girls!

Want CSVANW to include the name of your relative who is missing or murdered? Tell us and we will! Click here!