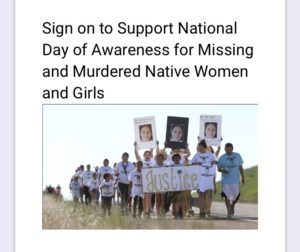 National movements within the past years for the safety of Native women and children has shed light on tribal communities and the harsh reality of violence. Violence is all to common on our Tribal Reservations across the Nation. In response to the recent death of Roslyn Rides Horse at the Crow Reservations and the murder of Hanna Harris at the Northern Cheyenne Reservations, the Montana Progressional Delegation is taking action. A resolution calling for the creation of a National Day of Awareness for Missing and Murdered Native Women and Girls was introduced, by Senator Steve Daines, Senator Jon Tester, and Congressman Ryab Zinke.

The tragic death of Roslyn Rides Horse and Hanna Harris has brought awareness to the inadequate response of the justice system and the safety of our Native women and children. Let’s not let their death be forgotten and to remember our countless relatives that their grief can be turned into action! The resolution would designate May 5, 2017, the birthday of Hanna Harris, as the National Day of Awareness.

The Coalition to Stop Violence Against Native Women, and our very own Deleana Otherbull (Executive Director), has signed the petition in supporting and bringing awareness to the creation of “National Day of Awareness for Missing and Murdered Native Women and Girls”.

Stand in solidarity with CSVANW, as we are calling upon your support to sign the petition (by July 21)!

Thank you for your support!