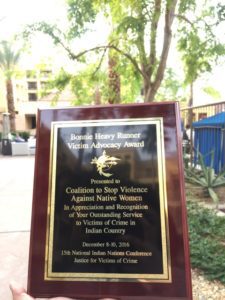 December 2016 | The Coalition to Stop Violence Against Native Women was one of twenty individuals and organizations across the nation that were awarded the 2016 Bonnie Heavy Runner Victim Advocacy Award at the 15th National Indian Nations Conference: Justice for Victims of Crime on December 9, 2016 in Palm Springs, California.

Since 2006, the Victim Advocacy Awards have been named after Bonnie Heavy Runner. Bonnie was a member of the Blackfeet Nation and grew up on the Blackfeet Indian Reservation in Browning, Montana. She was a tribal court judge, tribal court administrator, tribal court consultant- and a strong advocate for victims and survivors of crime in Indian Country until her death of ovarian cancer on November 24, 1997. 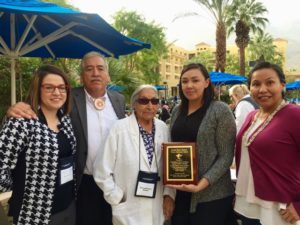 CSVANW is committed to stopping violence against Native women and children, and is honored to receive this prestigious Victim Advocacy Award for 2016. It is testimony to the strength, commitment and dedication that CSVANW has for it’s mission-driven work.