The Coalition to Stop Violence Against Native Women is proud to support the inherent right of tribes and pueblos to protect their women and children from violence. We stand in solidarity with our fellow tribal coalitions from across the nation, as well as the National Indigenous Women’s Resource Center, the Indian Law Resource Center and all of the amazing advocates who are taking a stand in support of tribal jurisdiction over non-Indians who assault our women and children on tribal lands. 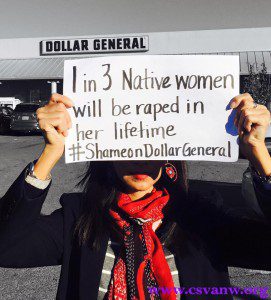 It is the mission of CSVANW to stop violence against Native women and children by advocating for social change in our communities.

In 2003, a 13-year old Choctaw youth was sexually assaulted by his supervisor, the store manager Dale Townsend, at a Dollar General Store located within reservation boundaries. Like many tribal job placement summer programs, the youth was placed at Dollar General to gain real world work experience.

After tort claims brought by the Native youth and his family against the non-Native supervisor and the Dollar General corporation, they were found liable. After lower federal courts upheld the tribal sovereignty of the Mississippi Band of Choctaw Indians, Dollar General asked the Supreme Court to declare that Indian Tribes have no civil jurisdiction over non-Indian defendants, even when they are accused of sexually assaulting Native women and children on tribal lands.

On December 7, 2015 the U.S Supreme Court began hearing oral arguments in the Dollar General case and will review the decision by the U.S. Court of Appeals for the Fifth Circuit, which upheld Mississippi Choctaw Tribal Court jurisdiction over the tort claims.

The Native youth who was sexually assaulted, has experienced large-scale trauma, perpetuated within his own tribal lands where he felt the safest. Indian children across the country experience rates of trauma three times more than the national average. The scale of suffering that Native youth face today is similar to the returning of veterans from Afghanistan and Iraq. This is often referred to as post-traumatic stress disorder and is often tied with intergenerational-trauma.

Dollar General signed a lease contract with the Mississippi Band of Choctaw Indians to build and make profit off of the leased Indian land. Therefore, Dollar General must take responsibility otherwise they are completely ignoring the tribal sovereignty and the reality of violence against Native women and children that exist at epidemic proportions.

CSVANW supports the Mississippi Band of Choctaw Indians right to full tribal sovereignty and the sovereign rights that our Native people have to their bodies. 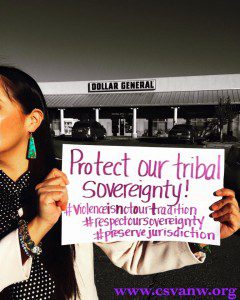 To support the National Indigenous Women’s Resource Center’s Monument Quilt and Quilt Walk for Justice, CSVANW created a quilt patch that was sent off to Washington DC for display in front of the U.S Supreme Court.