My name is Kymani Toya from the Pueblo of Jemez, and I am a member of the Native American Youth Empowerment (NAYE). My experience at the Coalition to Stop Violence Against Native Women (CSVANW) conference was very educating because it was my first time attending the summit and I felt that it had a lot to offer about being confident in who you are. Also, to stand up for what you believe in.

The first day, I didn’t know what to expect, but as we learned more of what CSVANW conference is about and I got more and more excited. The Santa Fe Mountain Center did ice-breakers to help us get out of our comfort zones. One of the ice-breakers consisted of half a pipe and our group was given a marble to slide through all of our pipes and make it in a cup. Also, we were assigned to our rooms with different people that we didn’t know and my first thoughts were it was unpleasant to be in a room with someone I’ve never met before; however, as we started talking to each other we established a friendship.

Onward to the second day, we went to the Santa Fe Mountain Center and we did some more icebreakers but after those were done we got introduced to a rope climbing course and we learned the instructions on how to climb and hold the ropes. My partner and I were the first one on the rope and it was so fun, nit at the same time, so scary. It took us 15 minutes to finish the course while the other groups took less than 5 mins. Although we were challenged, it was a fun experience to have with my partner, because we learned to trust each other even more. On the third day, we went to IAIA and we got a tour of the campus and what it  has to offer. 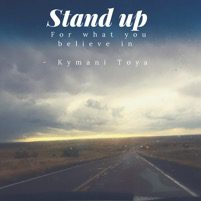 The fourth day was sad because we were leaving but before we did we were in sessions. One of which was Activism. In that session, I learned about what activism is and what it takes. For example, when you’re an activist you protest, stand up for what you believe in and you have to have leadership. That motivated me to fight for what I believe in and to “STAND UP AND FIGHT BACK.”