Will your community be represented at the national table by your Tribal Leaders? Ask them! The U.S. Department of Justice invites Tribal Leaders to join the 14th Annual Government-to-Government Violence Against Women Tribal Consultation. August 21-22, 2019 in New Buffalo, Michigan.

The purpose of the consultation is to solicit recommendations from tribal government leaders on three topic areas:

The Office on Violence Against Women (OVW) tribal grantees are strongly encouraged to accompany/collaborate with their Tribal Leadership for this event in drafting appropriate testimony and briefing on protocols for VAW tribal consultation. There will be time for additional testimony and recommendations for those who would like to submit to OVW.

Written testimony and documentation may be submitted to the OVW by September 30, 2019.

Meaningful consultation is of principal importance in developing legislation and policies that are inclusive of tribal representation and input. To create and sustain meaningful informed consultation, CSVANW puts forward recommendations for our tribal leaders to utilize that can support broad level policies, strategies and systems to advance the well-being of Native women and children.

Here are some recommendations that you may use to and share with your Tribal Leaders:

Please submit all testimonies to Shanda Tubman at shanda.tubman@chenegalogistics.com

If you are a non-elected/appointed Tribal member wanting to submit written testimony, you must submit either an authorizing resolution from your Tribal Council or a letter from the Tribal Chairman authorizing you to offer testimony on behalf of your tribe. Please scan and send this document to shanda.tubman@chenegalogistics.com.

Let your voice be known!

We ask you to post the social media memes (provided below) on your social media platforms and tag your Tribal Leaders! Tag CSVANW in your post so we can reshare your post and encourage others to do the same!

Use the hashtag #DearTribalLeaders and encourage your Tribal Leaders to attend and submit written testimonies/recommendations to the 14th Annual Government-to-Government VAW Tribal Consultation.

Let’s work together to make sure our tribes and Pueblos are represented at the table!

Ask your Tribal Leaders to call on Senators to act NOW and vote on the House version of H.R. 1585, the Violence Against Women Act Reauthorization Act of 2019 (VAWA) 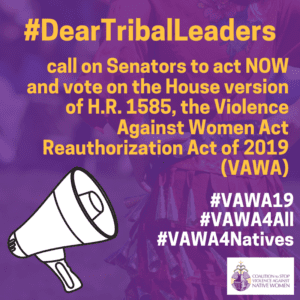 Tell your Tribal Leaders Almost three months ago, the House passed H.R.1585, the Violence Against Women Reauthorization Act of 2019, with strong bipartisan support. But it is time for Senators to act now on a substantially similar bill that maintains important protections for vulnerable survivors while making critical enhancements to prevent and respond to domestic violence, sexual assault, dating violence, and stalking.

Since its enactment in 1995, each reauthorization of VAWA, has resulted in significant victories in support of the tribal authority and secured resources needed for increasing the safety of Native women across the United States. H.R. 1585 will resume to build on these victories by:

These important enhancements are needed NOW to protect Native women and children!