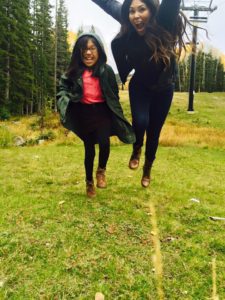 May We Raise Them by Angel Thomas, Office Coordinator

I was awake before anyone else in the hospital room that September morning, even before the sun rising in the East. I stared out the window and prayed—and I’m not even religious.

But, I knew my baby girl was coming that very day and I needed all the help I could get. I prayed for the strength to raise a woman of color, the guidance to lead her life’s mission with love, and for the patience that a child requires of their mother.

At 1:32pm, Olivia Madeleine was born and I cried tears of absolute pure joy because I finally got to see the little human I had grown to love so deeply over the nine months of my pregnancy.

She was here and so began my life’s new mission- to raise a warrior woman. To raise a leader.

During our first four years together I was blessed to stay home and make every tiny decision that would affect her outlook on life. I would nurse her until she turned two because that is the age most Indigenous children around the world are weaned and it would solidify that bond only a mother can have with their child.

I banned any doll that didn’t have beautiful dark hair and skin like my child, my mother, my grandmothers, from our home because I would not allow her to hold a standard of beauty that was unattainable for her—she was going to be brown and proud. 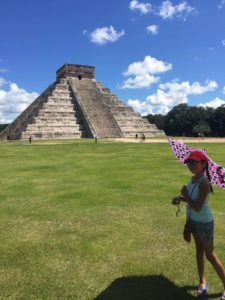 We read books where the brown girls saved the day because one day Olivia would also be the protagonist and she would need to call on stories from her childhood to give her courage. I taught her to answer this question: “What are girls good at?” and she would yell back, “MATH and SCIENCE” so that when she knows the answer in calculus and chemistry she will not be afraid to raise her hand and be known for her analytical reasoning. I told her stories about the real history of Natives in the Americas so when her teacher tells her class about Christopher Columbus—she could help narrate the history lesson from an Indigenous aspect.

I began laying the foundation for her perspective very, very deliberately.

By the time she turned five we had moved from Washington, DC to Kailua, Hawai’i and living in a community where the Indigenous Peoples were so vigorous and the culture was so strong only encouraged the lessons I was trying to give my child. It was seeing this connection to language, culture, and traditions that brought us home.

Before she turned six, she and I moved back to New Mexico and she began kindergarten. It was time to come home and nurture her roots—to give her the language of our People, the land of our Ancestors, and her culture. It has not been without struggle and sacrifice…believe me— raising a vocal, confident, and analytical woman leaves me without words myself sometimes. But, in her ninth year of life I am confident she is on the right path to being that strong Native woman—with fire and compassion playing equal parts in her actions and words. 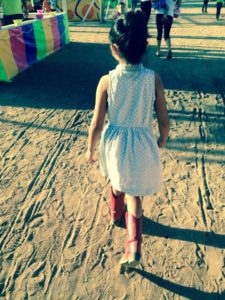 Seeing humility, kindness, selflessness, empathy, and generosity manifest in your child through their choices is the cornerstone of parenting. Viewing the world 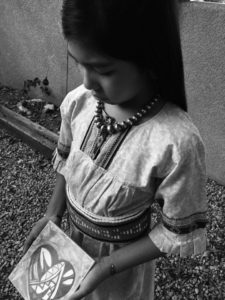 through her eyes has brought us on so many journeys and I relentlessly feed her curiosity. I encourage her to take risks and speak-up (although this has led to a lot of talking back), I believe she is truly gauging the line between respect and advocacy. I never shy away from telling her the truth or asking how she interprets the information I give her. I tell her often what my mom told me growing up, “you have two strikes against you in this world—you’re a woman and you’re brown…this means you work twice as hard for everything” and by raising a woman that is willing and ready to work twice as hard, we grow our leaders. I make sure she grasps the concept that as a leader she has to work harder than the person next to her while simultaneously curbing that innate drive to be competitive; working from humility and always from altruism.

Strengthening and broadening my daughter’s scope and frame of understanding elements from both inside and outside of her worldview is how I encourage her social consciousness to develop. We cut television from our daily diet and started devoting that time to reading instead, we started volunteering in our community, we joined a book club; these were three free basic ways to grow her basis of understanding her world.

I also took on a second job to help finance those experiences that aren’t free—like traveling. It is my personal goal to show her the world’s Indigenous cultures firsthand, so that it strengthens the pride she has in her own Pueblo heritage. This past year we took a two week backpacking trip to South America where she was able to see the tangible similarities 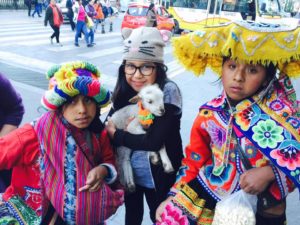 in our Native cultures and really begin to conceive the beauty in being a brown person in the world. Showing her the world outside of her immediate community has reinforced the pride and delicacy of her own environment.

In November, she and I will go to China and I cannot wait to see what lessons in cultural pride she derives.

Raising a responsible little Native woman is the greatest honor I have ever been given. I have the opportunity to continue the legacies of the women who have come before me through direct and conscience actions, words, and emotion. Through my daughter the world will be better.

I am so humbled to have this honor.