As Native people we value family and community greatly; especially in a world that wishes to erase us and our history.

With this in mind, imagine being 15 years old and feeling like family and your community are both throwing hatred and ignorance at you everyday. I was confused, lost, and lonely. 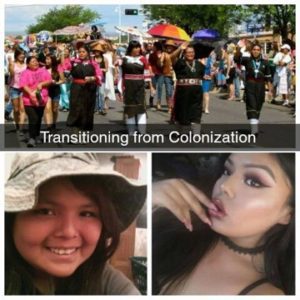 What did I do to have my people make me feel this way?

I decided to live my authentic life as the woman I’ve always have been. I’m a Native transgender woman.

As a child I was allowed to express myself as I wished. My mother was ridiculed for letting me play with dolls, but all she’s evercared about is my happiness. When I would play with all my cousins I was always the princess. In our youthful innocence, not yet tainted by what society deemed wrong or right, my cousins went along with it. It wasn’t until 3rd grade that I was made to feel “different’. One day I decided to bring my Bratz Dolls to school to show my friends. As

we were playing a group of boys walked by and started making fun of me. To this day I remember my throat tightening and tears blazing down my face.

This was the first time I was taunted for being feminine in a world that saw me as a boy who should be outwardly masculine and it wasn’t the last.

By the time I was in 7th grade, I had long beautiful hair that flowed down my back. I started to experiment with makeup in this grade. By 8th grade I was wearing makeup on a daily basis, plus I had long hair, soft facial features, and a strong feminine presence. Upon meeting me, people assumed I was a girl. I didn’t understand why I felt pure bliss when people called me “she.”Although I had identified as a gay boy for years at this point I still felt incomplete.

Near the end of 9th grade, I learned about transgender people. This newfound knowledge was the key to the chest that held the piece that completed me. A week after, I realized I was transgender I told my mother. If it wasn’t for her love and complete acceptance, I couldn’t even have begun this journey.

The summer between 9th and 10th grade I decided to socially transition. I was happy but beyond nervous to start school as my authentic self. I was the first person to transition at my school. The first couple of weeks I received stares, rude remarks, and even threatening comments. I expected those from my peers, but was baffled to receive them from adults.

My community was turning against me and it was disheartening, but what hurt enormously was family treating me badly. To shield me from ignorance my mother started cutting some family members out of our lives. I could see this hurt her but she did it for my well being and happiness.

During this time my home was the only place I was truly happy and I hardly left.

In 11th grade I was suspended for using the girls restroom for “the protection of the other girls” I felt crushed and all I could do was be held by my mother and let out big defeated sobs.

I decided I never wanted another trans person to feel as I had so with the help of my mother we fought. We fought to have trans-inclusive policies in my school district. It was an enormously long battle but we finally won it in my senior year.

During this year, I also attended a Native Trans Women Retreat. At this retreat I learned trans women’s place in Native history. I was pleasantly shocked to learn trans people were thought of as sacred. We were revered and respected. Trans women had a beautiful place and it made me wonder why I was treated badly by my own pueblo. It’s true I had my supporters and I’m grateful for that but most people hated my trans identity.

A few months later, I finally got my answer; colonization.

As a people, we have to work on decolonizing ourselves. This includes ending the hatred that is endlessly thrown at our trans sisters. Many trans women don’t have an amazing family that supports their transition. Many get beaten, kicked out, and disowned for being themselves.

No trans person chooses to be transgender. It’s an identity that’s given to us.

It breaks my heart to know that trans people who were once thought so highly of have been kicked down so low. It’s not our fault that we were shipped off to boarding schools and had our identity beaten out of us. That we were instilled with “good Christian morals”.

It is our fault to consciously keep colonized mindsets.

For the longest time I’ve been resentful towards people from my pueblo. I now realize to end the violence and hatred trans women face we must educate. Ignorance breeds hatred and we all must work together to end it. We need to start helping and treating trans women as human again. Dehumanization is killing us.

We are all children of the creator and we need to protect, love, and fight for one another as our ancestors did.