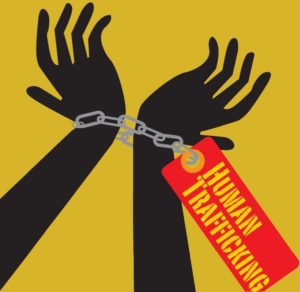 I am by no means an expert on human trafficking. Since joining CSVANW, I have attended many trainings and sat on various committees regarding human trafficking, but that does not make me an expert. I can tell you about the historical roots of trafficking as they pertain to Indigenous Women, I can show you the historical documents (journal entries) that explain how early colonist rewarded their men by giving them their pick of Indigenous women to use as their sex slaves. I can also tell you of the testimony I recently heard from an Alaskan Native woman whose daughter had disappeared from their small village and was later found with a trafficker in Anchorage or how an Albuquerque woman, who is from a nearby tribal community sold her daughter for drugs. What I can’t tell you is how trafficking currently affects our New Mexico tribal communities, because the data (the information) is not being collected and in many cases, when it is happening, it is not being called or identified as human trafficking. Why?

Maybe you’ve seen the movie Taken, the film with Liam Neeson, whose daughter gets abducted by traffickers in a foreign country. And that’s what you think of human trafficking, because that’s what I thought of whenever someone mentioning trafficking. Maybe you think trafficking is something that only happens in other countries, but doesn’t happen here in New Mexico, it certainly doesn’t happen at home in our tribal communities.

Unfortunately, human trafficking has been a part of our tribal communities since colonization started 500 years ago. We often don’t see it as trafficking though. In the past year I’ve attended trainings on identifying trafficking with local tribal law enforcement and after explaining what trafficking is, there are often a couple officers who will say we recently had a case where I am sure trafficking was involved, we just did not know that was trafficking.

So what is human trafficking? According to the Department of Homeland Security, trafficking “is modern-day slavery and involves the use of force, fraud, or coercion to obtain some type of labor or commercial sex act.” Human trafficking is not only sex trafficking, it can also be labor trafficking, which is forcing someone to work for you. For more information, take a look at this easy to read infographic: https://www.dhs.gov/blue-campaign/infographic.

We do know trafficking happens in our communities across New Mexico, we do know the information is not being collected to show the extent of the problem, we do know there are trainings and learning opportunities available to all New Mexico communities to identify trafficking. If you are interested in learning more, please see our calendar for upcoming training opportunities, like the New Mexico Attorney General’s Human Trafficking Conference on January 31, 2017 at the Albuquerque Marriott. Or you can visit websites such as https://polarisproject.org/human-trafficking or https://humantraffickinghotline.org/type-trafficking/human-trafficking.